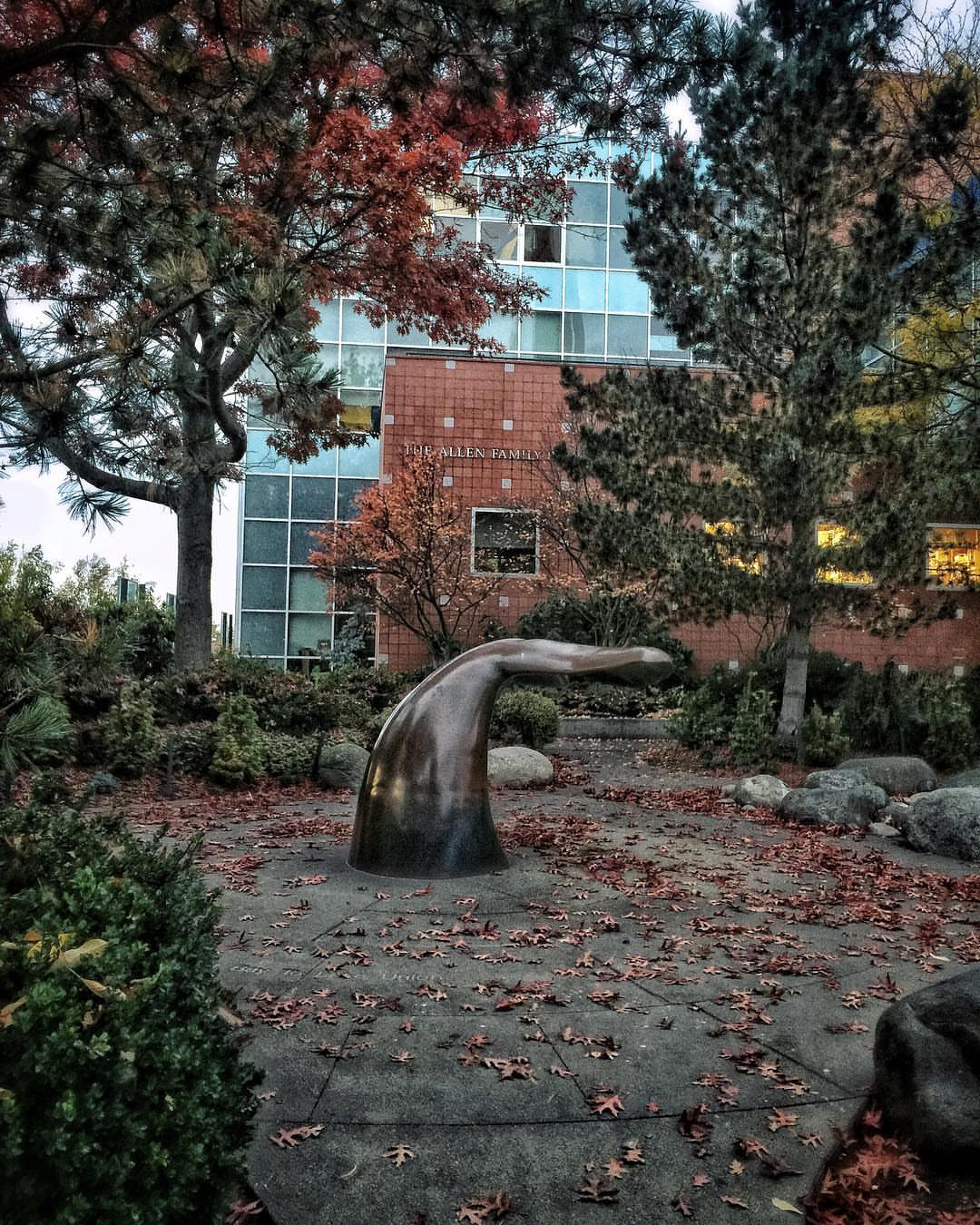 Paul guarded his eyes against the bright headlights of oncoming traffic before dashing across 3rd Ave from the Pegasus coffee shop. The coffee had been good, true to the spirit of Seattle, but the shop kept short hours; he’d have to look for something that stayed open later even if it meant it would be busier. Looking both ways he dashed across the street, dodging puddles the best he could, shielding his head with a Seattle Times from the never ending rain-mists, also a trait of the teeming Emerald City.

Staying dry beneath an overhang, he could hear the streams of water pouring down from the tusks of stone walrus heads he’d seen lining the facade of the odd building. While across the street he’d just managed to see them through the rain while sipping his ‘Huila’ blend -– a Columbian coffee the barista has assured him would be excellent. He was more of a tea drinker though; his palate just wasn’t geared towards coffee. He grinned at the irony of it all, being in a city so well known for its coffee and coffee shops.

Tapping his fathers old tweed messenger bag, feeling for his Ultrathin, he swung it back and asked the valet if he would put the soggy newspaper in with the recycling. Handing it over, he was jolted as his pocket buzzed with a text. He thanked the valet and yanked out his phone. In curt, punctuated sentences he read:

“Hey, sorry to bug you again, but do you know where the Pacific Science Center is?”

“Yes sir,” said the valet, replying as though it was common knowledge, “it’s right next to the Space Needle, but it’s probably closed by now.”

“That’s fine. Hey,” Paul pulled out a ten dollar bill, “you think you could get me a cab?”

“Oh, sir,” the valet’s eyes darted back and forth, “uhh... we’re not really allowed to take tips.”

“Well,” said the valet, pocketing the bill in a surprising display of deftness for his age, “normally we only offer services to our guests, but the weather’s so crummy, let me hail you an Orange cab.”

A short chatter into a radio and within moments a bright, true-to-the-name orange taxi pulled up at the curb. The valet opened the door and wished Paul a good evening.

The ride to the Pacific Science Center was a short one, Paul watched out the windows as he passed by alternating limestone and red brick buildings and at one point the “Seattle Art Museum” with a Paul Bunyan sized wrought-iron silhouette of a man, working hammer to iron in slow lazy strokes.

Brick walled stores led to tree lined roads with yet more shops, and Paul picked up his tweed messenger pack and held it close, feeling the familiar and reassuring shape of his ultra-thin, still safe. Before long he could make out the airy structural lattice that formed the Seattle Space needle and he knew he was getting close.

The cabbie took a left into a circle court with an entrance to the Space Needle and for a minute Paul thought that the driver had taken him to the wrong place. In response to the quizzical looks he was getting in the rear view mirror the driver pointed out a path that ran straight ahead, and indicated it was the fastest way from here. Paul slid his card through the reader and left a decent tip.

“Thank you sir, hope you have a good evening! Here’s your receipt - it’s got my number on it if you wanna ride later.”

Stepping out, Paul pocketed the receipt and yanked out his phone for directions to the sculpture. It was only a few minutes away and the rendezvous wasn’t for almost 15 minutes so he took his time and sat down by the bronze whale tale jutting out from the center of a circle of benches.

He pulled his bag onto his lap. His ultra-thin didn’t fit snugly, both products from different eras, but it had been his fathers and he’d always loved it. The bag was real bovine leather, not so easy to get these days, with tweed panels on the outer, and while the tweed would easily wick moisture right out of the air, the bag itself was nearly water-proof.

Growing up, he would always remember his father coming home with it. He’d close the door, lift the bag off his shoulder, hang it from the coat rack and instantly, the world would seem lift from his shoulders and he’d reach down, struggling a bit, and give little Ann and then Paul a hug – big hugs. Paul would squeeze him so tight he could feel his father's pen, eternally in his front shirt pocket, dig into his chest and pull a big waft of his Gray Flannel cologne.

Resisting the urge, Paul knew if he opened up the bag and stuck his face into it, he would get a hint of the Gray Flannel. He chuckled, imagining his co-conspirator walking up on him, head deep in a messenger bag, taking deep breaths. Whoever he was, he knew enough about his father to get his attention – and to actually agree to meet with him under cover of darkness beneath the lights of the Space Needle seated in front of a bronze tail of a whale. He felt like he was in a bad spy movie.

Paul pulled out his phone again, and just like that it was swiped out of his hands. Stunned, Paul turned around to see an older man in a damp trench-coat, stuffing his phone into a silvery padded envelope.

Looking slightly embarrassed, the older man only briefly made eye contact with Paul before explaining the envelope acted as a Faraday cage – a counter-surveillance measure. Paul’s mouth still stood open as the man sat down next him and handed back his enveloped cell phone.

“Hello, Paul. I’m Edgar. I used to work with your father. Do you remember me at all?” He let this sink in for a moment. Flashes of half-remembered photographs of his father and Edgar – real or imagined – flipped through Paul’s mind recognizing but unable to place the man.

“Sorry for the cloak and dagger routine, I’m kind of new to it myself, but it’s come to my attention that we happen to be in mutually advantageous positions. I’d like to show you some of your father’s work, and... not to put too fine a point on it, I don’t think you’ll like how it’s been used – if you remember even a fraction of what he taught you anyway.”

“It’s all a bit wonky, isn’t it?” Edgar’s voice crackled with age and the coughed to clear his throat.

“I wish there’d been an easier way to do this. In any case, I have instructions here should you want talk,” Edgar paused, handing Paul a folded up index card “...and if not, I’ll understand.” Paul just sat there, card in his hand as Edgar grabbed his shoulder and squeezed.

“It’s really good to see you again, Paul. I hope to talk again soon.” Eyebrows drawn tight together, Paul watched the man just get up and walk away.
‡